The PMAG 20 LR/SR GEN M3 brings many of the M3 improvements to the 20 round 7.62 NATO/.308 Winchester SR-25 magazine form factor. All of the GEN M3 improvements are here in the 20 round capacity of our previous design. The PMAG 20 LR/SR GEN M3 replaces the MAG243 in our line. The 7.62x51 NATO (.308 Winchester) PMAG 20 LR/SR GEN M3 is a lightweight, cost effective, high reliability magazine for SR25/M110 pattern rifles featuring true 20-round capacity, constant-curve body, anti-tilt follower and snap on Impact/Dust Cover. Designed specifically for military-issue MK11/M110 rifles and mil-spec ammunition (including M118LR), the PMAG 20LR/SR is less than half the weight of standard issue steel magazines and maintains a service life round count approximately equal to the rifle barrel itself.

Since 1928, PRVI Partizan has been producing custom ammunition in Serbia for competition, indoor ranges and hunting.  PRVI manufactures over 400 different calibers ranging from so many western calibers, military and metric calibers to include this NATO spec. M80 ball ammo, all non-corrosive and all in reloadable, boxer primed cases. 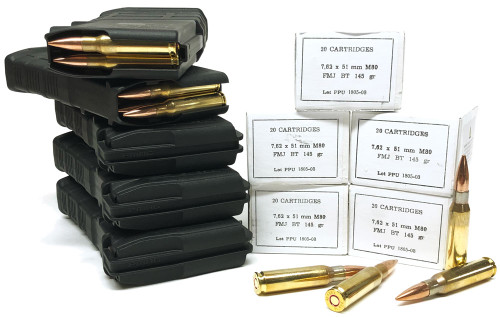